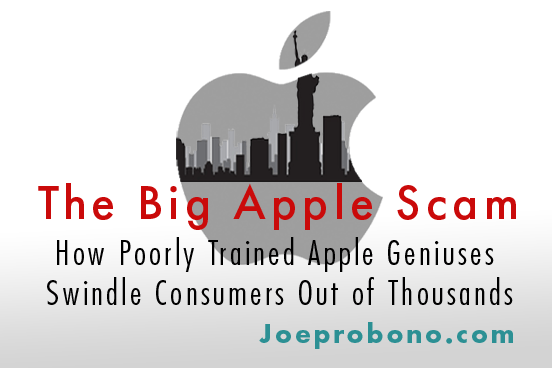 What Is the Genius Bar?

Since its founding in 1976, Apple has been a dominant leader in the consumer tech industry. Valued by Forbes at $148 million at 2018, Apple has not let its industry-leading status deter its monster growth. But there’s a stark difference between a company and its employees. Now more than ever, Apple consumers are coming forth claiming that they were ripped off by the Apple Genius Bar (their in-store technicians), shedding light on a growing concern that the Apple Genius bar isn’t as smart as it seems.

For those who aren’t familiar, the Apple Genius Bar is a simple yet revolutionary approach to retail. A customer who is experiencing an issue with their Apple product simply takes the device into any store, schedules an appointment, and is met with a qualified technician who will then troubleshoot, diagnose, and attempt to repair the unit. The Genius Bar not only serves as a convenient way for customers to get service, but strongly differentiates Apple from any other consumer tech provider, as well as providing a level of service to justify their hefty price tags.

However, this all falls apart if the Apple Genius Bar isn’t properly diagnosing the failed products. Even worse, reportedly the suggestions made by Apple for their poorly troubleshooted theories can cost a customer hundreds. Can you imagine that? Paying hundreds, if not thousands, in repairing a part of a product that didn’t need to be repaired at all!

Investigating this issue was CBS News. Going undercover, CBS’ journalist presented a MacBook computer whose screen was so dim it was almost black to the Genius Bar, a common problem with Macbooks. The technician took the unit into the back, and then came back claiming that the Macbook had been damaged by water. His reasoning for this was because white, round indicators had turned red on the interior of the Macbook, which do so when they are exposed to water. So the solution? Replace the logic board, top case, and possibly the display of the computer, all vital technical components that would run anywhere from $1200-$1980 (with a $100 labor cost included). At practically $2,000, that’s almost the price of a new Macbook pro. At the end of the appointment, the Apple Genius offered no alternative other than to foot the insane price tag or buy a new computer.

So, CBS turned to a different genius, a 3rd party repair-shop legend, Louis Rossman. Rossmann is the owner of Rossmann Computer Repair, a small repair store on 1st Avenue, Manhattan. Rossmann took a look at the same Macbook, and found that a small pin was misplaced inside the unit. After bending it back, which took no more than two minutes, Rossmann was able to restore light to the screen, bringing it back to near immaculate condition. The interviewer asked Rossmann how much he would charge for such a service, to which he replied that it would be free considering how easy of a fix it was.

Thousands of dollars versus free. Sloppy, Apple certified technicians versus third party repairs. While this illustration is just one incident, a simple Google search will produce countless other testimonials. Of course, there have been times where the Genius Bar has functioned absolutely flawlessly, but this does not excuse the other customers who are, frankly, being taken advantage of.

So What Do You Do?

For the average tech consumer, who wouldn’t be able to tell if Apple is swindling them or not, and doesn’t have access to stellar repairmen such as Louis, what do you do?

Get a Second Opinion, Always.

Treat your electronic repairman as a doctor. If your doctor insisted on a high-cost, difficult medical treatment, odds are you’d want a second opinion. When Apple insists on a high-cost repair, take it to someone else, if even for just a look. A great place to find qualified technicians who are willing to assist pro bono (free of charge) is Joe ProBono. Joe ProBono is an online matchmaking site that connects clients in need of free services to those willing to offer it.

But before you go anywhere or approach anyone, take some initiative and try to figure out what may be the problem yourself. The internet is a wonderful resource and a fantastic learning platform. You will likely find others who’ve experienced a similar technical issue as well, and can provide advice and resolution. A great forum to checkout is Reddit Apple Help (r/applehelp). The more informed you are, the better you can prevent big companies like Apple from taking advantage of you.

We’d love to hear about your experiences with Apple, so be sure to comment below and share this article to help raise awareness!